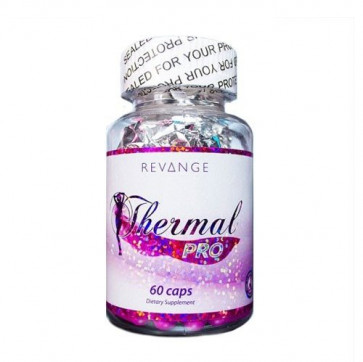 Thermal pro Femm is a unique fat burner from Revange. The formula is based only on proven and effective ingredients acting in a synergistic way. It works great even with resistant fat tissue.

Thermal pro Revange will provide you with an incredible metamorphosis of your figure, and with a balanced diet will ensure you a quick loss of kilograms.

The supplement works already with a short period of use!

Losing weight is up to 12 kg in one package!

A safe and natural product will effectively reduce your appetite, speed up metabolism, add energy and, what is the most important, will sculpt your silhouette.

Join a group of satisfied women using Thermal Pro and get the desired silhouette without the yo-yo effect.

L-Carnitine - is directed to all athletes and people struggling with unnecessary kilograms. This amino acid plays an important role in metabolic processes, facilitating the transport of fatty acids to the mitochondria, where they are converted into energy. Thanks to the ongoing processes, it is easier to remove excess fat tissue, resulting in a more efficient reduction of body weight. L-carnitine perfectly complements the diet and physical exercise, allowing you to get even better results!

Rhodiola Rosea- is a plant that belongs to the group of adaptogens, that is, plants that help the body to adapt to high mental and physical stress. Its main activity is to relieve fatigue, improve concentration and improve mood. All this translates into better results at the gym, as well as at work or school.

Dicaffeine malate - is characterized by very good solubility (better than ordinary caffeine). It has a strong antibacterial effect, helps to control microbiological growth and improves efficiency.

Green tea - catechins contained in green tea inhibit the enzyme called catechol O-methyl-transferase or COMT, which actually breaks down the fat-burning hormone norepinephrine. Because green tea is rich in catechins, it helps raise the level of norepinephrine, keep it at an elevated level and prolong thermo genesis. It has also been shown that there is a synergistic interaction between caffeine in green tea and catechins (in particular EGCG) in green tea, which increases the body's use of calories as energy. In addition, it was found that the combination of caffeine and EGCG in green tea significantly increases the resting metabolic rate.

The extract of bitter orange-bitter orange is not an edible fruit, but it is an excellent source of vitamin C, the amount of which can reach up to 42% in the extract. Bitter oranges are much richer than just vitamin C, but also antioxidants, such as bioflavonoids, such as hesperidin. In addition to the high content of perfectly digestible vitamin C, the bitter orange is primarily known for its consistency in the synephrine plant, which is a natural substitute for ephedrine. Synephrine has a similar structure to ephedrine. It is obtained in a natural way, from immature citrus fruit, e.g. Citrus uranium L., Citrus aurantium L. This substance is a natural substitute for ephedra. Increasingly, it is added to drugs and dietary supplements intended for athletes as well as overweight people. This compound boosts metabolism, reduces appetite and at the same time increases mental and motor activity. Synephrine increases blood pressure and affects the minute volume of the heart. It widens the bronchi to facilitate breathing, effectively clears the sinuses and improves well-being.

B-PEA- is an organic chemical compound found in its natural form (eg in chocolate) and synthesized in the human body from the amino acid I-phenylalanine. As a neurotransmitter and neuromodulator, it affects the nervous system, increases the amount of dopamine and norepinephrine. The only disadvantage is the rapid degradation by the MAO-B enzyme, in the case of oral administration, hence it is sometimes modified by decaying deleterious components. In sports supplementation, PEA is used to raise mood, stimulate, elevate thermogenesis, pre-workout. It is also part of the fat burners.

Cocoa extract - high quality cocoa powder obtained from unprocessed cocoa fruit grown in South America. It is rich in fiber and contains all three macronutrients: protein, carbohydrates and fat. Powder is also a source of potassium, phosphorus, magnesium, iron, copper and manganese. Iron contributes to normal cognitive function, the formation of red blood cells and hemoglobin, the transport of oxygen in the body and to reduce fatigue. Magnesium helps in reducing fatigue and balancing the electrolyte balance and normal functioning of the nervous system. Potassium contributes to the proper functioning of the muscles, normal functioning of the nervous system and to maintaining normal blood pressure. Phosphorus works by increasing energy metabolism, proper functioning of cell membranes and contributes to the maintenance of healthy teeth and bones. Copper contributes to the maintenance of normal connective tissue and normal function of the immune system. Manganese, on the other hand, helps maintain proper bone structure, supports the formation of connective tissue and protects the cell from oxidative stress.

Alpha GPC- or choline alfoscerate is a natural precursor of acetylcholine, which is a neurotransmitter that supports the development of cognitive functions, as well as beneficial to improving memory. Alpha GPC is a highly bioavailable form of choline that is part of the cell membranes in the brain and other nerve tissues. Scientific research has shown that Alpha GPC supplementation really raises the level of acetylcholine in the brain, which translates into significantly better memory and concentration, also in young people. Other clinical trials have proven that L-alpha-glycerylpforsilylcholine supplementation supports brain function

Cayenne pepper - is one of the best natural remedies for weight loss. It has been proven that the use reduces the appetite speeds up the metabolism up to 25%, contributing to faster burning of calories. Capsaicin - the main active ingredient of pepper - is responsible for such action. An additional advantage of the application is a positive effect on the overall health, and the advantages include: increased blood flow, increased sex drive, ulcer reduction, improved digestion and impact on maintaining adequate blood pressure.

Sulbutamine - a derivative of the known vitamin B1 (thiamine). It is an organic chemical compound that penetrates the nervous system in an amazingly effective way. It is important for normalizing processes in the nervous system - eliminates anxiety attacks, improves the quality of contacts with the environment, reduces such feelings as shame, shyness, lack of self-esteem or fear of other people. As a drug, it is widely used to treat asthenia or having sexual origins in the psyche. Thanks to the nootropic properties, it greatly influences the improvement of memory and concentration, improves the efficiency and endurance of the whole body for both physical and mental effort. It also helps to regenerate quickly and effectively. Sulbutiamine is also a preparation that facilitates slimming, by significantly accelerating the metabolism of carbohydrates in the body and effective fat burning.

Vitamin E - is responsible for building cells, thanks to which wounds heal faster and the body can fight infections by producing antioxidants.