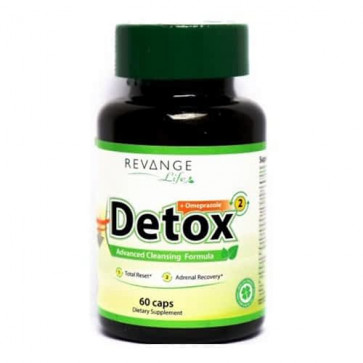 Revange Life Detox, a new supplement that cleans receptors after using all psychoactive substances. A powerful detoxifying formula restores the sensitivity of receptors to the effects of stimulants, eliminating the body's getting used to the active ingredients used. Thanks to the use of Life Detox you will be able to enjoy the equally effective effects of preparations as if you were using them for the first time. The preparation contains the memantine component - NMDA receptor antagonist that stimulates cognitive and intellectual functions. The supplement strengthens the body's immunity, removes accumulated toxins and strengthens immunity. It contains the addition of ingredients that restore normal adrenal function and enzymes that facilitate digestion.

NAC - is a modified form of cysteine ​​that has been attached to the acetyl group. has the effect of raising the level of antioxidant-glutathione, which in turn reduces damage at the cellular level, accelerates post-traumatic regeneration processes and promotes the construction of dry muscle mass. The reduction of damage at the cellular level is closely correlated with the delay of aging processes. NAC binds and excretes toxic metabolites formed when steroids pass through the liver.

Milk Thistle - milk thistle is a source of silymarin. Silymarin is a flavonoligan complex present in the milk thistle seed shell. In addition to the silymarin mentioned above, the raw material also contains valuable compounds such as phytosterols, flavones, phenolic glycosides as well as vitamins E and F. The substance acts as a stabilizer of cell membranes, has a cholagogic, detoxifying, anti-inflammatory and antispasmodic effect. It effectively regulates the passage of food and protects liver cells against the harmful effects of alcohol and mycotoxins. Has antioxidant effect, prevents cirrhosis of the kidneys and heart. Due to its ability to lower bad cholesterol in the blood, it is recommended for the treatment of natural hypercholestrelolemia. In addition, it prevents the formation of deposits and gallstones.

Turmeric 95% - Turmeric root is rich in strong curcumin antioxidant. turmeric is hepatoprotective - protects liver cells from toxins, and can even help regenerate the cells of this organ. Curcumin as one of the bioactive components of turmeric, inhibits degenerative processes within the joints through a pronounced anti-inflammatory effect, which is of particular importance for people struggling with rheumatism, i.e. degenerative changes of the musculoskeletal system, as well as sports injuries.

Ashwagandha - high-quality Ashwagandha root extract as an adaptogen has a positive effect on the body's energy management. Contributes to the protection of tissues against damage - acts as an antioxidant and supports the building of muscle tissue. It helps in maintaining vitality, well-being and emotional balance as well as in states of reduced concentration, exhaustion, fatigue and nervous tension. In addition, it supports the processes of learning, remembering and maintaining mental fitness in good condition.

Rosmarynic Acid - rosemary acid - exerts anti-inflammatory and antioxidant effects on the body. It is also an inhibitor of enzymes responsible for the decomposition of hyaluronic acid, which determines the elasticity and youth of the skin by retaining water in it.

Echinacea Extract - purple coneflower root extract, the medicinal product of plant origin stimulates the immune system. Research to date shows that it can mainly affect the non-specific, i.e. independent of antigens and antibodies, defense system of the body stimulating the body's resistance.

ALA - alpha-lipoic acid, is a natural organic compound from the group of carboxylic acids, which plays an important role in removing free radicals, also has the ability to chelate metal ions, which improves the process of removing heavy metals from the body. Alpha-lipoic acid actively supports weight loss, which promotes the loss of excessive kilograms, further reducing excessive appetite and uncontrolled hunger attacks.

Eleuthero Root - Siberian ginseng is an adaptogenic herb that has long been used to help the body adapt to all everyday stressful situations. This ingredient will help revive your mind and body to increase your memory and reduce fatigue. Thanks to the use of ginseng you will become calm, balanced and will make informed decisions.

Phospatidylserine - is a unique and valued dietary supplement addressed to people undertaking an intensive lifestyle, regardless of the type of activity. Phospholipids show the greatest potential in people with a very fast lifestyle, prone to stress and physically active. Phosphatidylserine supplementation has become very popular in the circle of people in high social positions due to the effectiveness of research confirmed on many levels. In modern supplementation, it is also increasingly the object of professional interest of athletes in many disciplines.

Rutin - is a flavonoid of plant origin, strengthens and seals blood vessels. It prevents the formation of spider veins, improves blood elasticity, which prevents the appearance of swelling in the legs.

Vitamin D3 - together with calcium has a beneficial effect on the nervous system, prevents rickets, strengthens the heart and relieves inflammation. In addition, vitamin D regulates insulin secretion, which affects the proper level of sugar in the blood. Studies show that it stimulates the bone marrow to produce defense cells and prevents some cancers.

Magnesium - a bone component - stabilizes the level of calcium phosphates, which prevents their demineralization, a cofactor of many enzymes (e.g. kinases), plays an important role in the process of muscle contraction, stimulates the body's defenses, necessary in the initial phase of the process of steroidogenesis, indirectly controls the synthesis of growth hormone , insulin and insulin-like growth factor (IGF).

Zinc - necessary for the synthesis of protein and nucleic acids, directs muscle contractility, has its share in the process of insulin formation, accelerates wound healing, improves mental performance, is a cofactor for numerous enzymes.

Cordyceps - also known as Chinese macea - a species of fungi from the high mountain areas of Tibet, called the Himalayan viagra for its sexual performance; classified as adaptogens, i.e. herbal substances (extracts) supporting the body's resistance to stress stimuli and traumatic experiences, used in states of fatigue or anxiety. It contains many bioactive ingredients, among others adenosine, cordycepine, vitamins (E, K, B1, B12), phytosterols, flavones, nucleosides, beta-glucans and numerous minerals. It has anti-diabetic, anti-cancer, anti-inflammatory, anti-bacterial, anti-viral, anti-fungal, tonic, anti-rheumatic, hepatoprotective, and immunomodulatory properties (increases the activity and production of leukocytes).