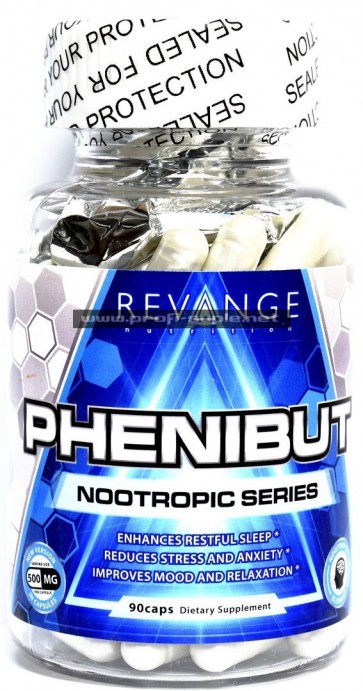 The chemical structure Phenibut is essentially a modified version of the GABA neurotransmitter with an added phenyl group molecule. By making this small change, we get a supplement that successfully crosses the blood-brain barrier much easier than when taking directly GABA supplements. In fact, the mere use of GABA is largely ineffective because in its natural form this neurotransmitter can not cross the blood-brain barrier in any way.

GABA must be synthesized in the brain so that it can be used there. When it reaches the central nervous system, it binds to the GABA receptor sites, which results in increased stimulation of GABA-responsive neurons. The reason why GABA is so important, especially for people suffering from anxiety and excessive stress, is that it is considered to be the main inhibitory neurotransmitter in the human body. It is a chemical substance that is largely responsible for turning off the brain when it is too excited or excited. From a chemical point of view, when the brain is excited, too many neurons work at the same time. In the case of too much stress, the neurons seem almost incapable of giving way.

GABA comes to the rescue and is able to reduce this excessive activity, resulting in less stimulation and reduced symptoms of anxiety and stress. Phenibut has numerous satisfied users who praise its effectiveness in nervousness, generally enabling relaxation and better well-being. Some users praise Phenibut by staying late in the evening to help in a more peaceful sleep and even to promote lucid dreaming. People take Phenibut as a relaxing substance instead of harmful alcohol, because some of the effects of this relationship have some similarities.

There are a number of effects of using this nootropic to which we can include: improvement of memory, learning, concentration and even making important decisions. In addition to using Phenibut as a dietary supplement, it is also administered in the medical world as a panacea for various body dysfunctions. In Russia and some other European countries,Phenibut is often prescribed by doctors as a medicine for sleep disorders, insomnia and various fears. Phenibut is generally considered a safe supplement when you follow the instructions on how to use it correctly. It has been proven that Phenibut raises the level of dopamine in the brain resulting in improved mood and increased libido.

The results of the study indicate that Phenibut significantly improves the functioning of the brain, leading to the normalization of brain tissue metabolism, as well as modulating the blood flow in the central nervous system. Phenibut will help you achieve a natural mental balance, without showing any adverse effects on psychomotor functions. It is a great product for learners, working, during periods of intense physical and mental effort, as well as those who can not cope with everyday fast life, where stress and anxiety accompany you.