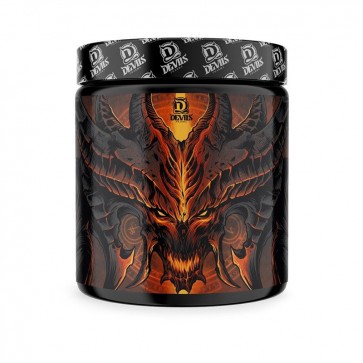 Devils Pharma Devils Work a new pre-workout preparation combines ingredients with a stimulating effect, enhancing the synthesis of nitric oxide. The pre-workout contains a set of the most effective ingredients: yohimbine hydrochloride, DMHA, AAKG, citrulline malate, naringin, higenamine, glycerol. The combination of ingredients that increase muscle pump together with ingredients that reduce even resistant fat tissue allows for quick results in the form of a muscular, full body without excess unwanted fat. The supplement perfectly increases alertness and attention during training. The increase in dopamine due to pre-workout increases the motivation to perform long and exhausting workouts.

Citrulline Malate - participates in the synthesis of nitric oxide (NO) and phosphocreatine and oxygen metabolism of glucose, thereby increasing the uptake of oxygen, glucose, amino acids and creatine, and energy production through muscle cells. It reduces the concentration of lactic acid and ammonia in the muscles, thanks to which it allows the body to recover energy faster by increasing the level of creatine phosphate and ATP resynthesis. Citrulline malate is a much more effective form than high doses of arginine, as it is its precursor. At the same dose as arginine, it is more effective in increasing its amount in the body than arginine alone.

Arginine Alpha Ketoglutarate - is involved in the formation of nitric oxide and thus has the ability to dilate blood vessels, allowing better blood supply to muscles and soft tissues. It indirectly participates in the synthesis of cGMP, which, along with ATP, is involved in the process of muscle contraction and has anabolic effects. It affects the secretion of growth hormone, supports the process of liver regeneration, is an important precursor for creatine. Unfortunately, but the traditional form of Arginine breaks down easily in the stomach and thus a small amount reaches its destination.

N-Acetyl-L-Tyrosine-acetylated derivative of the L-tyrosine amino acid. Plain L-tyrosine is less stable and also less soluble in water, which can lead to reduced bioavailability. Acetylation increases the solubility and stability of some amino acids. N-acetyl-L-tyrosine supports brain function by supporting the synthesis of norepinephrine and dopamine (neurotransmitters) catecholamines.

AGmass - is a highly pure and natural source of agmatine produced by modern fermentation methods. Agmatine effectively increases the secretion of nitric oxide in the human body, which translates into a strong feeling of muscle pump during training. Vasodilation supports the supply of blood and nutrients to working muscles, which significantly accelerates the regeneration process and builds new muscle fibers. In studies with the use of agmatine, it has been shown that its action can support protein synthesis even twice, which, in addition to the action of agmatine itself, is also associated with the action of increasing the supply of nutrients to muscle tissues.

Glycerol - is a compound that occurs naturally in our body. Its main function is to regulate fluid levels in tissues and blood. The benefits we get from the described phenomenon are: improved absorption of compounds taken together with Glycerol, faster delivery of nutrients to cells, more anabolic environment, more visible use (associated with the movement of water from space, between muscle cells, into the blood) and more noticeable " pump effect "during workouts.

2-Aminoisoheptane - is a stimulant that has other names, such as 2-aminoisoheptane or octodrine. DMHA works bronchodilator, which increases our aerobic capacity, in addition, it has decongestant activity (narrowing of blood vessels, causing an increase in the rate of oxygen flow).

L-Norvaline - an organic chemical compound from the group of branched chain amino acids belonging to non-protein amino acids. Norwalin is an arginase inhibitor, thus increasing the concentration of arginine. The biologically active enantiomer is L-norvaline. Norwaline is used to regenerate muscle tissue after exercise. Its natural origin is nuts, meat and cereals. It intensifies the anabolic and anti-catabolic effects of arginine, affecting the increase of exercise capacity (strength and endurance) and causes more effective blood supply and nutrition of muscle tissue. Norwalin supports the delivery of nutrients and vitamins to the muscles, which enhances and accelerates muscle building.

Theobromine - by inhibiting cAMP-decomposing phosphodiesterase, increases its concentration, which affects the preservation of clarity of thinking and promotion of the lipolysis process, thanks to which it increases the pool of easily available resources of energy substrates. Theobromine also affects the relaxation of blood vessels and lowering blood pressure.

L-Theanine - has psychoactive properties because it easily overcomes the blood-brain barrier. It stabilizes the mood, calms down, relieves the symptoms of stress and anxiety. Also used as a nootropic agent - improving cognitive functions, work efficiency and learning effectiveness. Researchers have proven Theeanin's effectiveness in increasing attention, alertness and productivity, and the effects are already visible within the first hour after administration.

Kaempferol - is a natural flavonol, found among others in broccoli, tea and ginkgo biloba leaves. The biologically active compound has antioxidant, anti-inflammatory, antimicrobial, anti-diabetic and anti-cancer effects.

Hordenine - is a natural compound of phenylethylamine, which is found in small amounts in various plants. This supplement works primarily by releasing and protecting norepinephrine, which translates into increased metabolism, energy supply, and a decrease in appetite. Users use Hordenine for three main effects: fat loss, appetite control and energy boost.

Mucuna Pruriens- medicinal plant; its seeds contain levodopa, which is a direct precursor of dopamine and an effective drug in the treatment of Parkinson's disease. It improves mood and increases activity, resulting in increased exercise capacity and sexual function. Effectively increases the possibilities for dopamine synthesis. This amazing neurotransmitter is an extremely important element for the proper functioning of the nervous system and the flow of nerve signals. Dopamine deficiency has been demonstrated in people who have been diagnosed with Parkinson's disease, especially in the regions of the brain responsible for its motor level. Low levels of this neurotransmitter may be manifested by the onset of memory loss, problems with achieving full focus and concentration, and this also often affects the elderly.

D-Glucorono-3,6, lactone - helps in removing harmful products arising during metabolic transformations accompanying physical effort, is a precursor of ribose (helps in the conversion of glucose into energy), helps in the transport of carboxylic acids to muscle cells for use as an energy source .

Synephrine HCL-synephrine has a similar structure to ephedrine. It is obtained naturally from unripe citrus fruits, e.g. Citrus uranium L., Citrus aurantium L. This substance is a natural substitute for ephedrine. It is more and more often added to medicines and dietary supplements intended for athletes as well as overweight people. This compound boosts metabolism, reduces appetite and at the same time increases mental and motor activity. Synephrine increases blood pressure and affects cardiac output. It widens the bronchi making it easier to breathe, effectively clears the sinuses and improves mood.

Higenamine - an alkaloid obtained mainly from the seeds of Nelumbo Nucfera - Nelumbo Nelumbo, in small quantities it can also be found in coffee. It shows a synergistic effect to NMT causing the release of norepinephrine and adrenaline into the blood resulting in the expansion of the airways and thus the increase of body efficiency. The compound acts as a stimulant, increasing energy and alertness. Higenamine reduces oxidative stress by protecting the body against free radicals.

Yohimbine HCL - works by blocking fat-burning α2-type receptors, which can clearly facilitate weight loss and help sculpt resistant parts of the body. It is worth remembering that the effect of yohimbine effectively eliminates insulin, so taking this compound around meals containing carbohydrates is pointless. Yohimbine can be particularly effective when used on an empty stomach, before exercise.

Vitamin D- affects many physiological processes in the human body at the genetic level and plays a key role in maintaining overall health. D3 participates in the synthesis of about 200 proteins in the body and particularly strongly affects the growth of fast-contracting type II muscle fibers responsible for strength and shaping the muscular figure. The effect of vitamin D on calcium and phosphate metabolism also directly translates into the state of the skeletal system, because calcium is necessary for proper muscle contraction and conduction of nerve impulses, and its appropriate amount improves training endurance and shortens muscle recovery time

Vitamin C - is the basis for the structure of the skin, bones, cartilage, tendons, blood vessels and valves in the heart. Ascorbic acid is a powerful antioxidant, accelerates the decomposition of harmful substances formed under the influence of intense training, also effectively protects against infections. Another advantage of this vitamin is the improvement of iron absorption and improvement of oxygen transport to cells, which clearly translates into improved muscle condition. Effective absorption of oxygen extends the time of muscle work and delays the stage of anaerobic muscle breathing causing soreness. In addition, vitamin C effectively leaches lactic acid from the muscles and thus accelerates the recovery process after training. In addition, ascorbic acid affects the release of male hormones including testosterone which is desired by athletes.

Vitamin B9 - or folic acid - is involved in the synthesis of nucleic acids from which DNA is formed. Thus, it regulates the growth and functioning of all cells, necessary for the proper functioning of the nervous system and brain. In the digestive system, it helps the liver, intestines and stomach function properly, and forms gastric juice. In addition, it reduces the risk of developing colorectal, stomach, and cervical cancer. It has a calming and soothing effect on the senses.

Vitamin B12 - mainly responsible for the proper functioning of the nervous system, also participates in the metabolism of proteins and fats and contributes to the proper level of homocysteine, supporting the circulatory system. Stimulates the production of serotonin - a neurotransmitter responsible for good mood. It also works directly on brain cells, protecting them from harmful toxins.